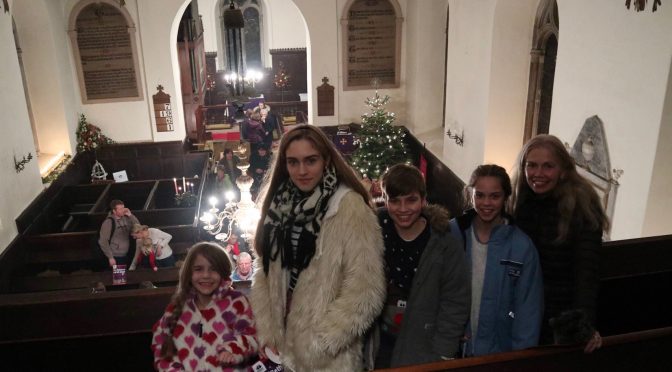 So, here we are.  The start of another year.  2017 was a tricky year personally- we found ourselves in places we never even imagined, but like so many other people, we muddled our way through and came out the other side in between a lot of love and a bit of laughter, crying, yelling and pretty much every other emotion in between.  And this is the good thing – there were some really amazing bits in between the crap stuff.  And I know, without a doubt, that our four children – my Tribe – are amazingly wonderful.  They have all been on a muddled journey, much of which has been too difficult to possibly understand, but they have survived and are still giggling over the silly stuff of life.  And that is simply, a good thing. (Our most recent foray into silliness was as a wise man, innkeeper’s wife and shepherds at the Hawk Conservancy’s Nativity montage – perfect start to the Christmas holidays.)

So my online 2017??  A bit rubbish, but I’ve decided I should give myself a break and  given that I managed 31 out of 52 weeks of publishing – plus a load of unpublished posts – it wasn’t a bad attempt at my weekly look at life, particularly given the rollercoaster year we had.  The rollercoaster is continuing, but that’s another story, so in 2018 I’m embarking on a similar project, but on a daily basis – why I think I’m going to manage a daily post I have no idea, but hey, why not??  I hope that it will encourage me to post more – short and sweet is the way forward.  And I will continue to concentrate on life and the world around us, particularly as time spent in nature has now been categorically proven to be good for our mental health.  Well, hooray for that 😊.

Happy new year and thank you for reading – I hope that 2018 is a more positive year everywhere.  And here’s my 1st January 2018 shot – with the Tribe on the Isle of Wight, looking down at the Needles. 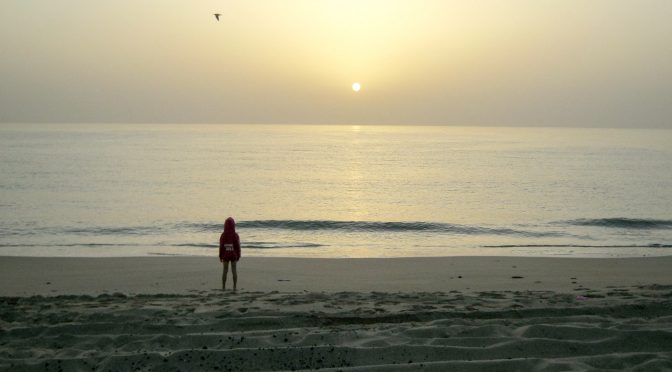 This morning, in the car on the way to the station, the Eldest casually mentioned that it was Mental Health Awareness Day.  She told me that she’d written a couple of pieces and perhaps I might want to post something on my blog.  I asked her to send me the articles – she suggested that I may want to edit some of the content – I have removed some of the more graphic parts.  Reading her words brought back a lot of the utter fear of the places that we found ourselves in this year – for her, for her siblings, for us as parents and for our family unit.  This ‘thing’ that is mental illness knows no boundaries – it can affect anyone, even those who appear, to the outside world, to have everything.  And it obviously doesn’t stop with the individual themselves; I have spent too many waking hours worried about the impact on the rest of the Tribe.  I have seen how people have reacted when I’ve explained about her illness -some have suggested a course of vitamin C, others have glazed over and looked slightly embarrassed, others however have been incredibly warm hearted and have shared their own stories of dealing with mental health either themselves or someone close to them – that has helped so much.  The stigma is still there but the more we talk about it the more likely it is that more people will get help and we can all begin to understand how to deal with this illness.  What the Eldest has been through has made me realise how utterly precious this life is, how the simple things really are some of the best and kindness and generosity of spirit are much underrated and should be practised more often – totally free and brings happiness and joy.  And she’s in a better place now, recovering, but living, laughing and loving. 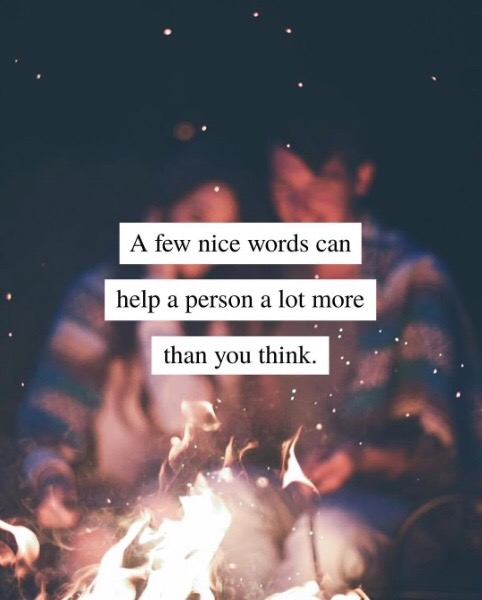 So, these are her words; I am proud that she is standing up and talking, it is brave and inspiring – I hope they will help you understand or know you’re not alone.

“People always make out that mental illnesses shouldn’t be talked about, and the amount of stigma surrounding it makes it somewhat awkward. But seeing as it’s Mental Health Awareness Day, I thought It seemed appropriate for me to talk about it as it’s something that has played a very large part in my recent life.

Surviving or thriving? Those are two states I’ve swung between for most of this year. Often all I’ve been doing is existing; just trying to get from one day to the next.  When my mental health hit an all time low this year, it got so bad that I required multiple hospital admissions. I was at the hopeless mercy of my ‘black dog called depression’. Getting up, showering, speaking, all things that we take for granted, were physically impossible. At night I’d lay awake for hours simply because I couldn’t find the motivation to close my eyes.  Mental illnesses can sometimes get to the point where they threaten your physical health as well. Only my close friends and family really got to see the amount of pain I was in, but even they could never understand the full extent of it. It’s so difficult to explain to people what’s going on inside you, when you can’t even understand it yourself. It’s difficult to tell, when you look at someone, to see that they’re mentally ill. When I first became ill, people actually found the idea of it slightly funny, because what could be wrong with my life that caused me to struggle?? I mean, I looked fine, I was smiling. What could be so wrong that it meant that someone who had everything she could ask for, still didn’t feel she was enough?? Even now, I still can’t tell you. Maybe I’ll never know. These things happen, and they don’t always have something to be justified by.

By watching me struggle, so many people in my life have had the blurry patch of ‘mental illnesses’ brought into light by what I’ve been through. I feel that so many more people understand now, even if not completely, that these things DO happen, and despite the common associations made with it, I’m not crazy, psychopathic or dangerous!! I have had an illness, just like a person with pneumonia has an illness. And I can get better, just like a person with pneumonia can get better. These things don’t go away easily, you have to work hard. You can’t ‘just eat’ if you have an eating disorder, and you can’t ‘just be happy’ if you have clinical depression, so stop treating people as if that’s going to fix all their problems!! You wouldn’t tell someone with cancer to ‘just get over it’, so think about that before you say it to someone who’s mentally ill. Believe it or not, some people actually in the profession still fuel the stigma. I once had a paramedic say to me ‘you can’t be suicidal, you’re not chronically ill. You’re being so selfish, there are people out there dying of cancer’. This was in an ambulance on the way to hospital and I was completely shocked as to how someone who had to deal with suicidal people on a daily basis could actually say this to me. People do not always need something to justify their feelings, sometimes the feelings are simply just there. 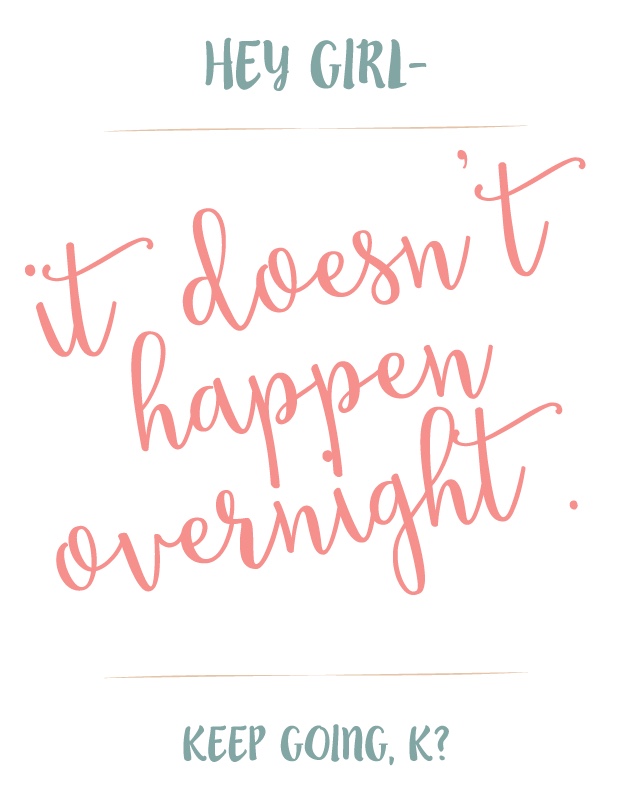 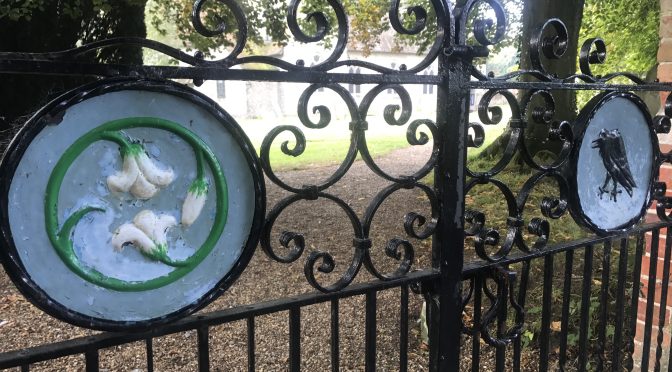 Harvest Festival time so it must be autumn. 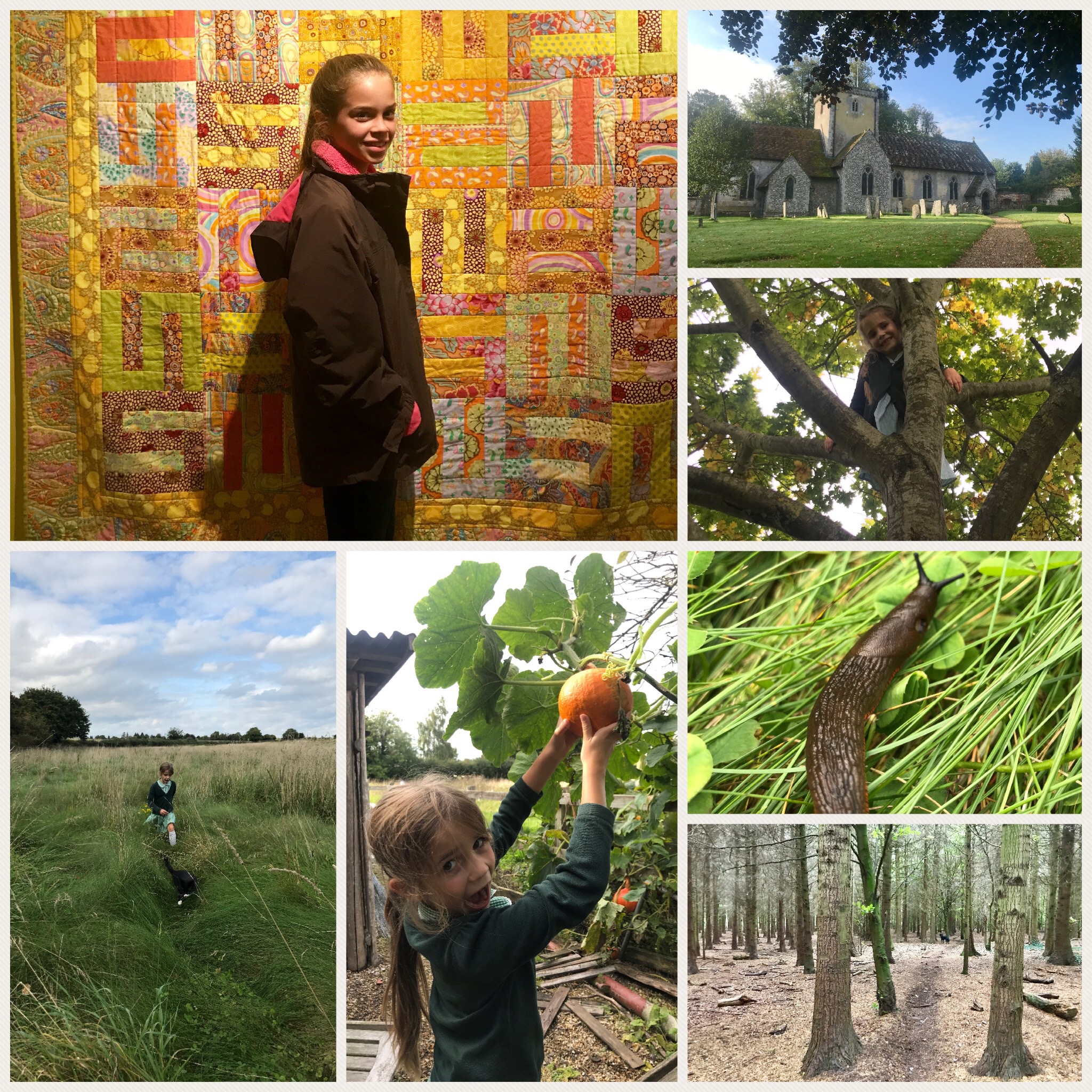 Awesome Kaffe Fassett exhibition at Mottisfont, St Mary’s Church in Amport before the school’s Harvest Festival service (and I’m still singing the songs in my head!!), finding the Littlest half way up the tree outside school, taking a walk with Jemima after school, our crazy pumpkin ‘tree’, slug time, another lovely dog walk in another beautiful wood. 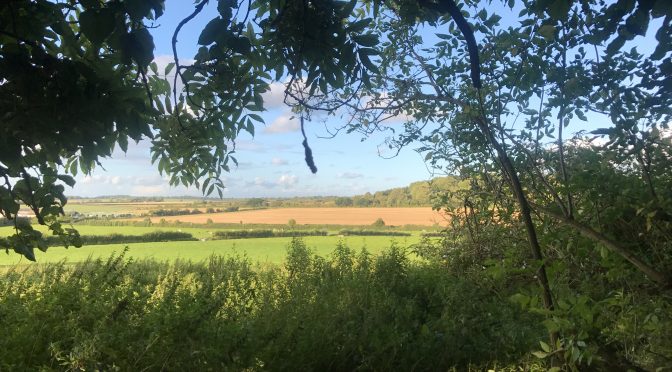 Looks like summer is definitely over – no Indian summer this year! But we’re making the most of the last few weeks of light evenings. 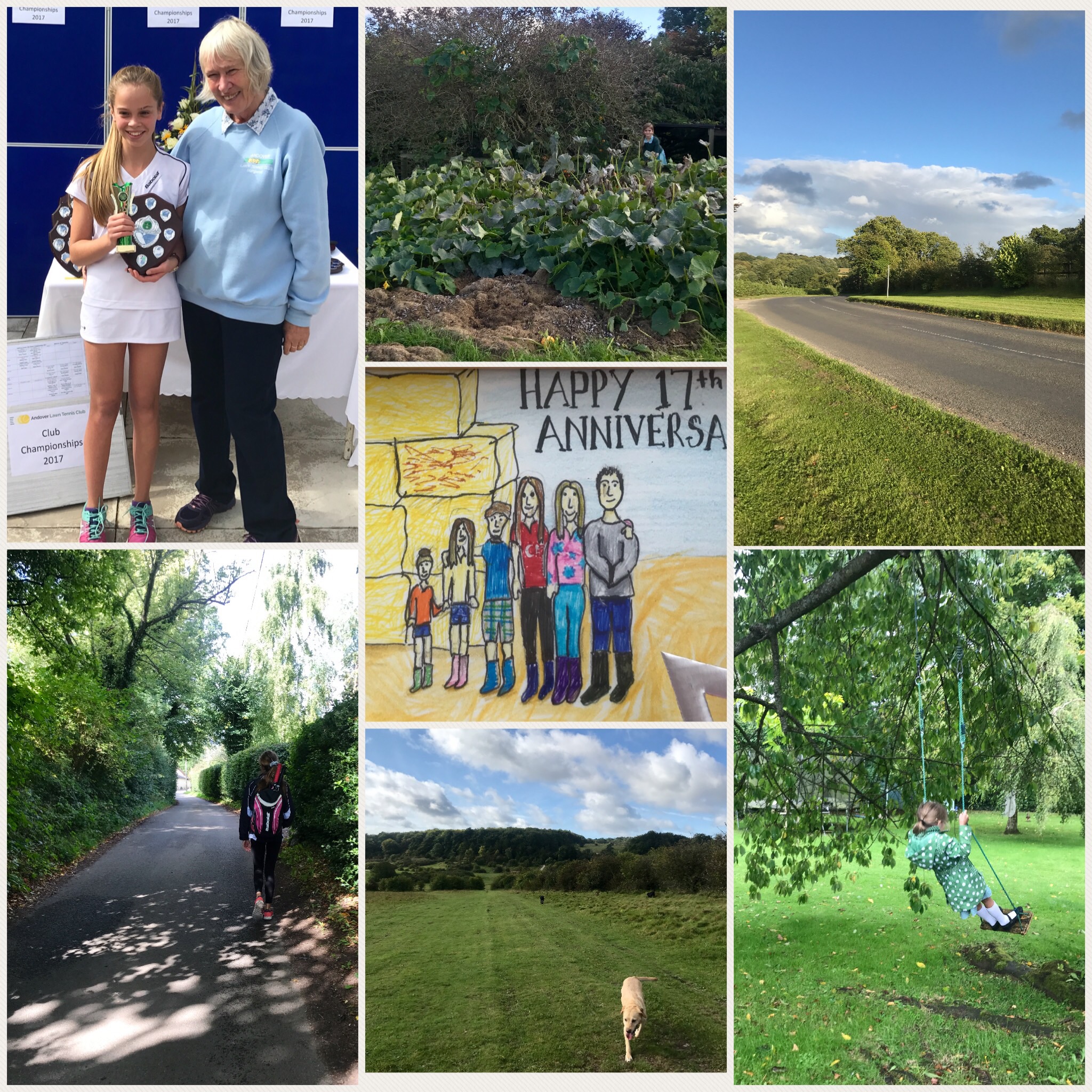 GD at Andover Lawn Tennis Club’s 2017 Championships, our incredibly impressive pumpkin patch!, back on the road to Sparsholt for netball (at least the countryside is glorious), another year with FoTT (not the best year, but we’re all still here), walking back from tennis with the Eldest, another dog walk with my buddy 😊, the Littlest before school. 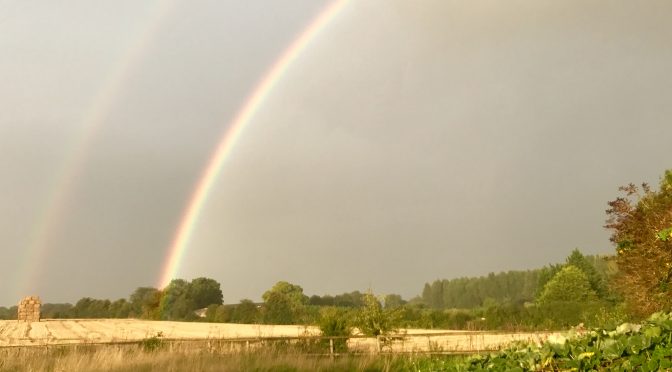 The last few days of the summer holidays and it already feels as if autumn is here.  And another school year begins; a better one we hope. 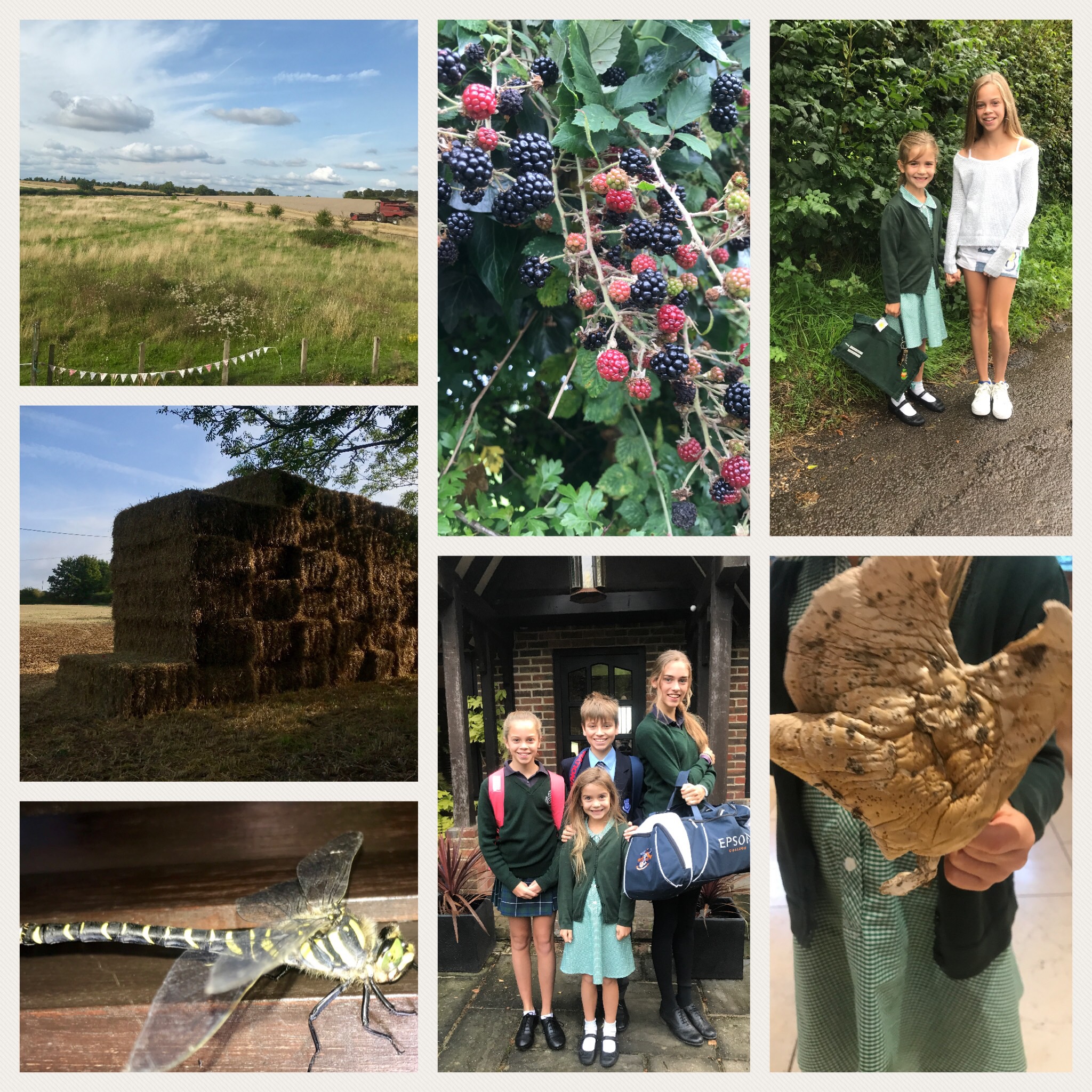 Our first day home and the fields behind us are being harvested, succulent blackberries, Littlest being taken to school by one of her big sisters, the harvest, a last dragonfly of the year,  all the Tribe back to school (the Eldest missed 6 months of year 10) – a really special day and yes, I did have a big lump in my throat, but a smile in my heart, ‘look what I found!’ the Littlest with huge mushroom! 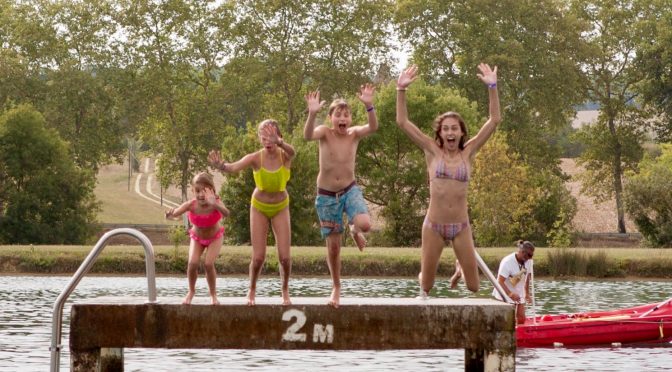 The end of the holiday – good to be together; not all plain sailing, but moving in the right direction I hope. 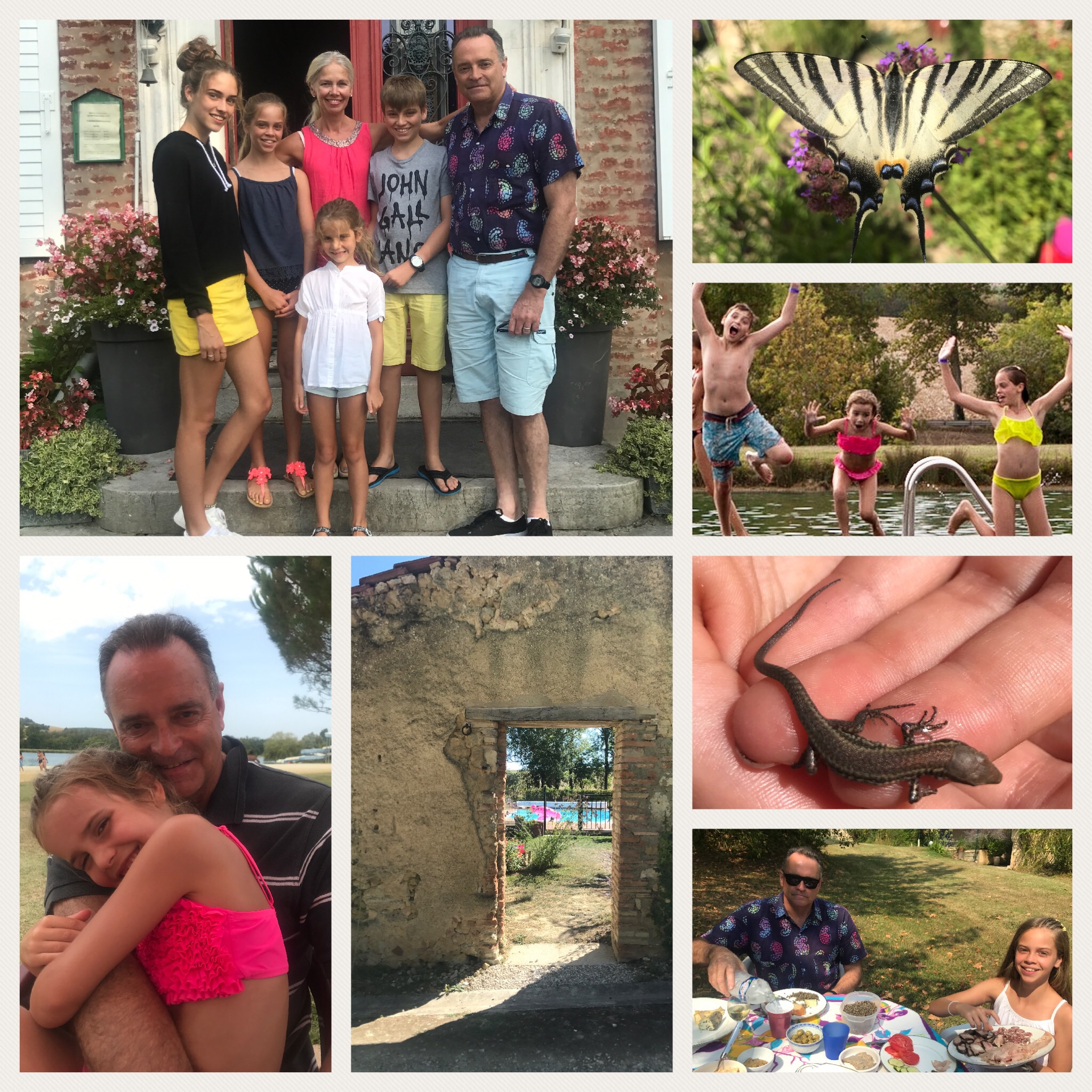 Outside our final stop at the fabulous Le Manoir de Bonningues, swallowtail butterfly, fun at the nearby beach & lake, Littlest with her daddy, our stunning pool, another holiday ‘pet’, another family lunch. 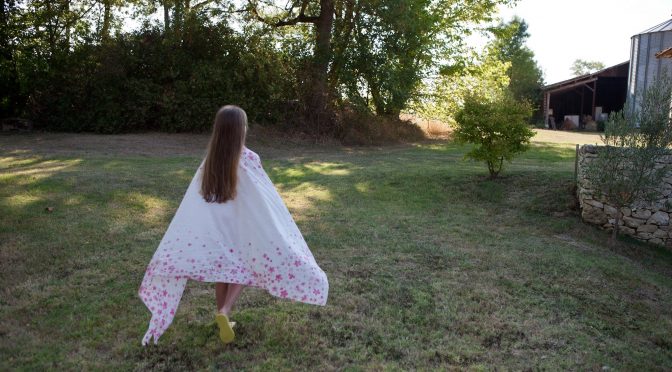 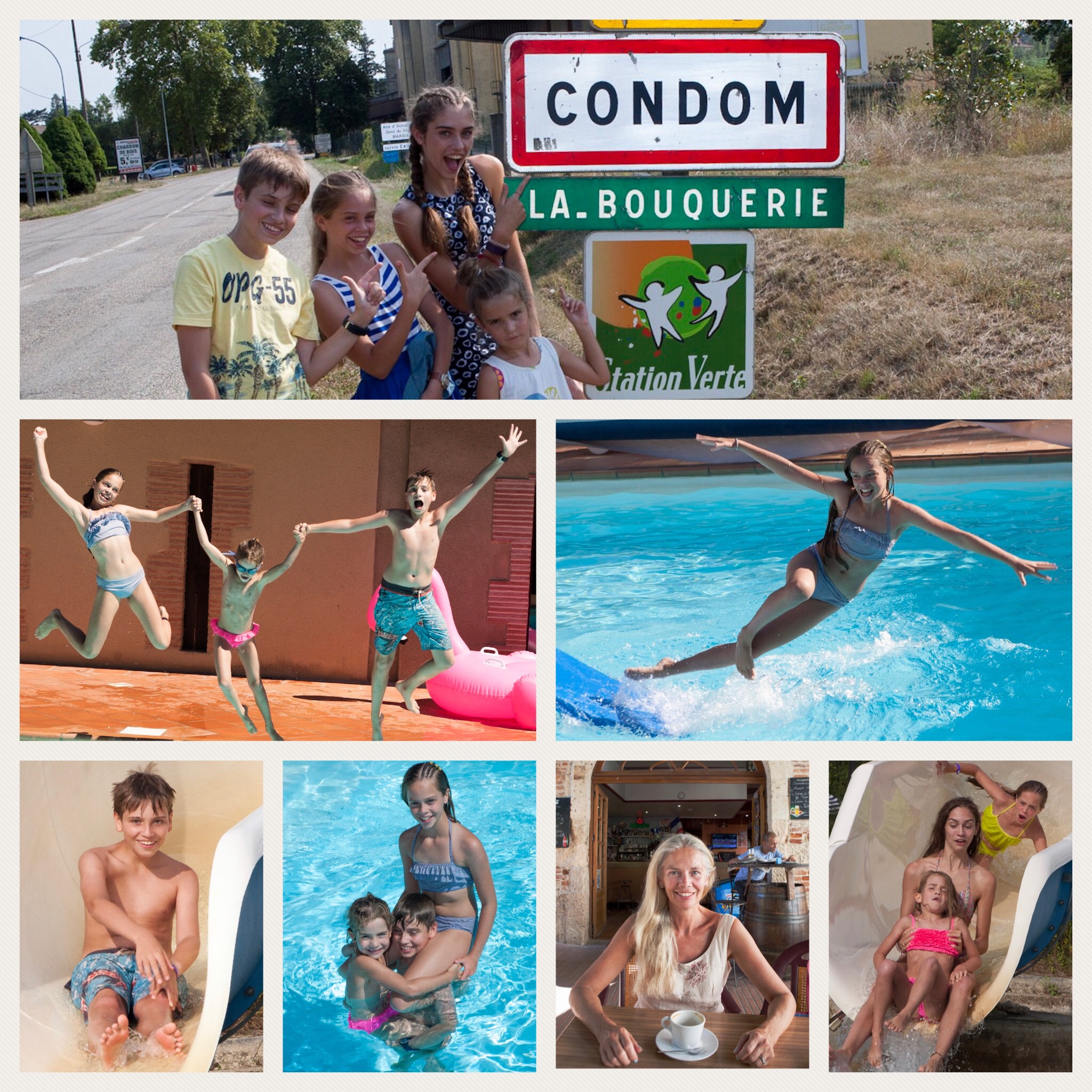 Condom is a beautiful town that has an unfortunate name, but it obviously makes us laugh every time so we are just another silly family that’s stopped to take a photo, happy days at Domaine de Lassalle, coffee at our favourite bar in Gimont. 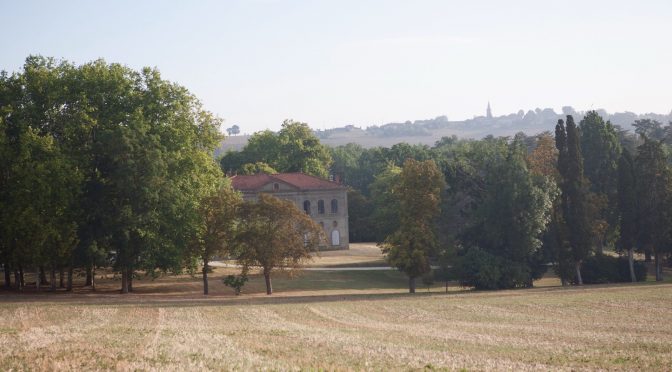 Time to escape the return of the British summer as we head south for a much needed family holiday. 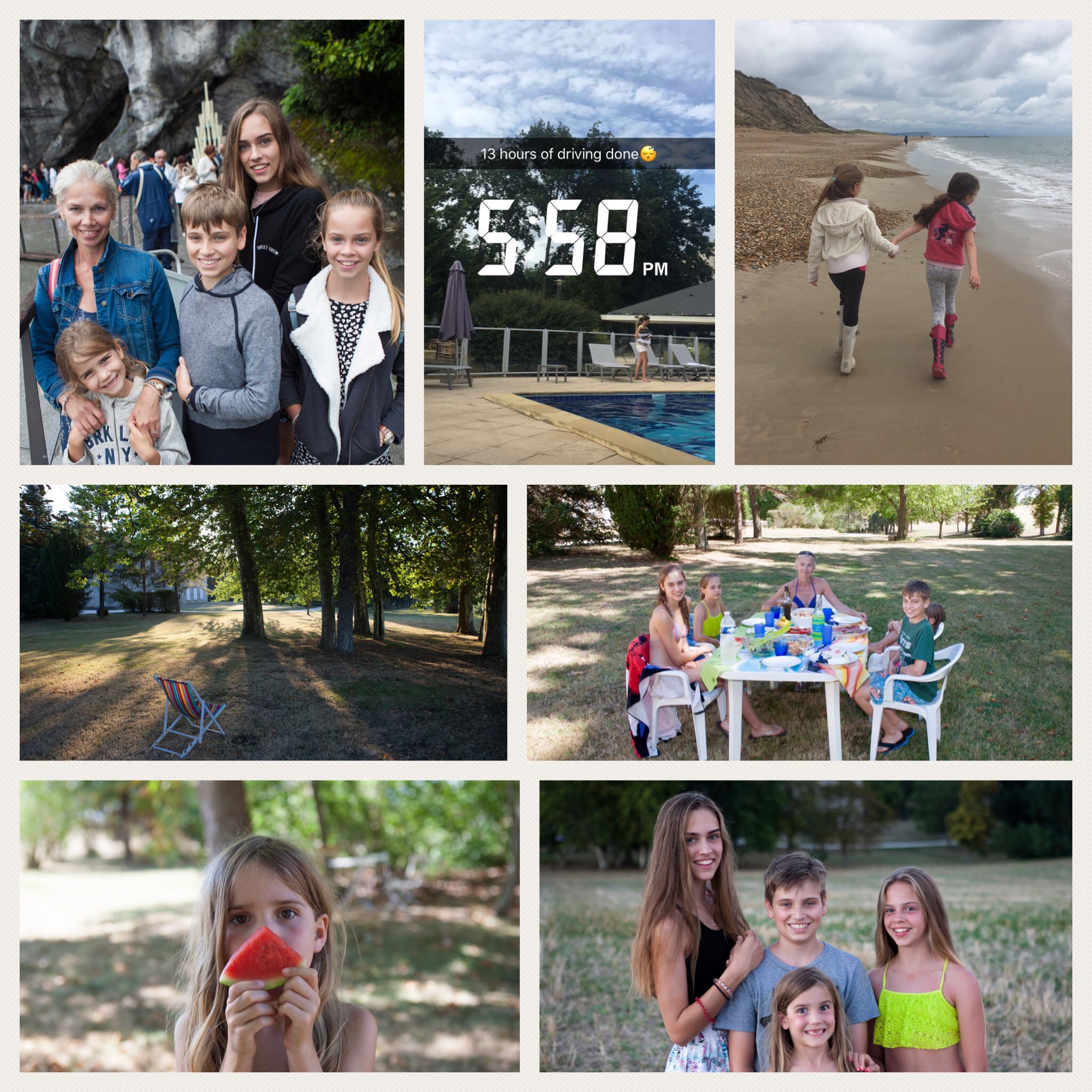 On our own ‘pilgrimage’ to Lourdes, we did drive a very, very long way!, the Littlest with friend on the south coast before heading to France, returning to the blissfully beautiful Domaine de Lassalle, lunch, the Littlest, my Tribe. 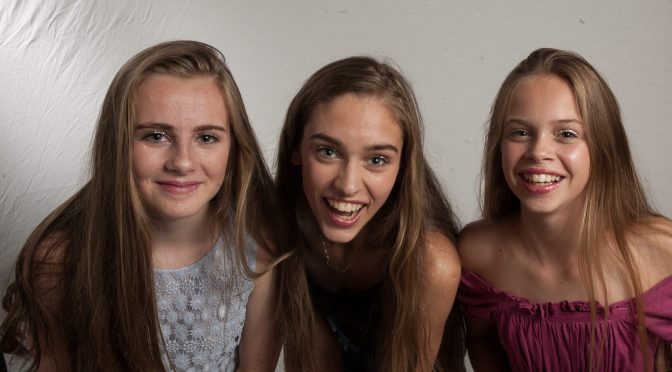 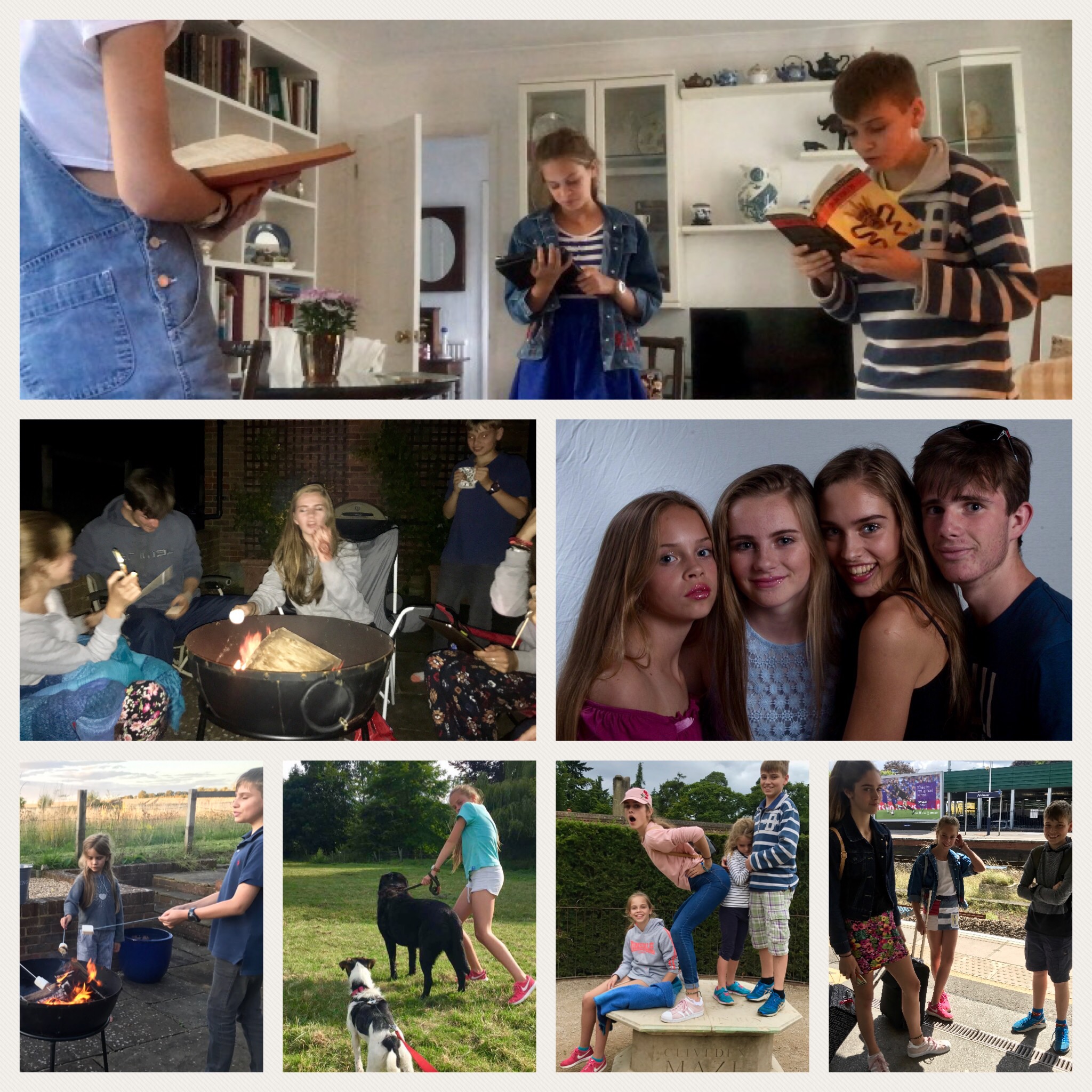 The Tribe reading Macbeth together at their grandparents, toasting marshmallows with friends, photoshoot with friends at home, more marshmallows, with Guinness and Murphy, the Tribe in the middle of the maze at Cliveden, the Tribe off to stay with their cousins. 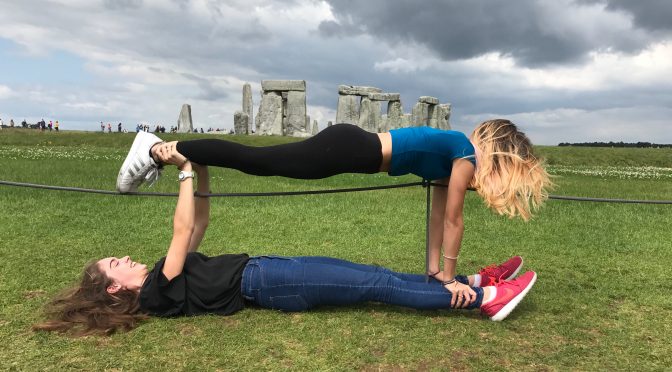 A noisy, fun-filled week and finally, all the schools finish for the summer. 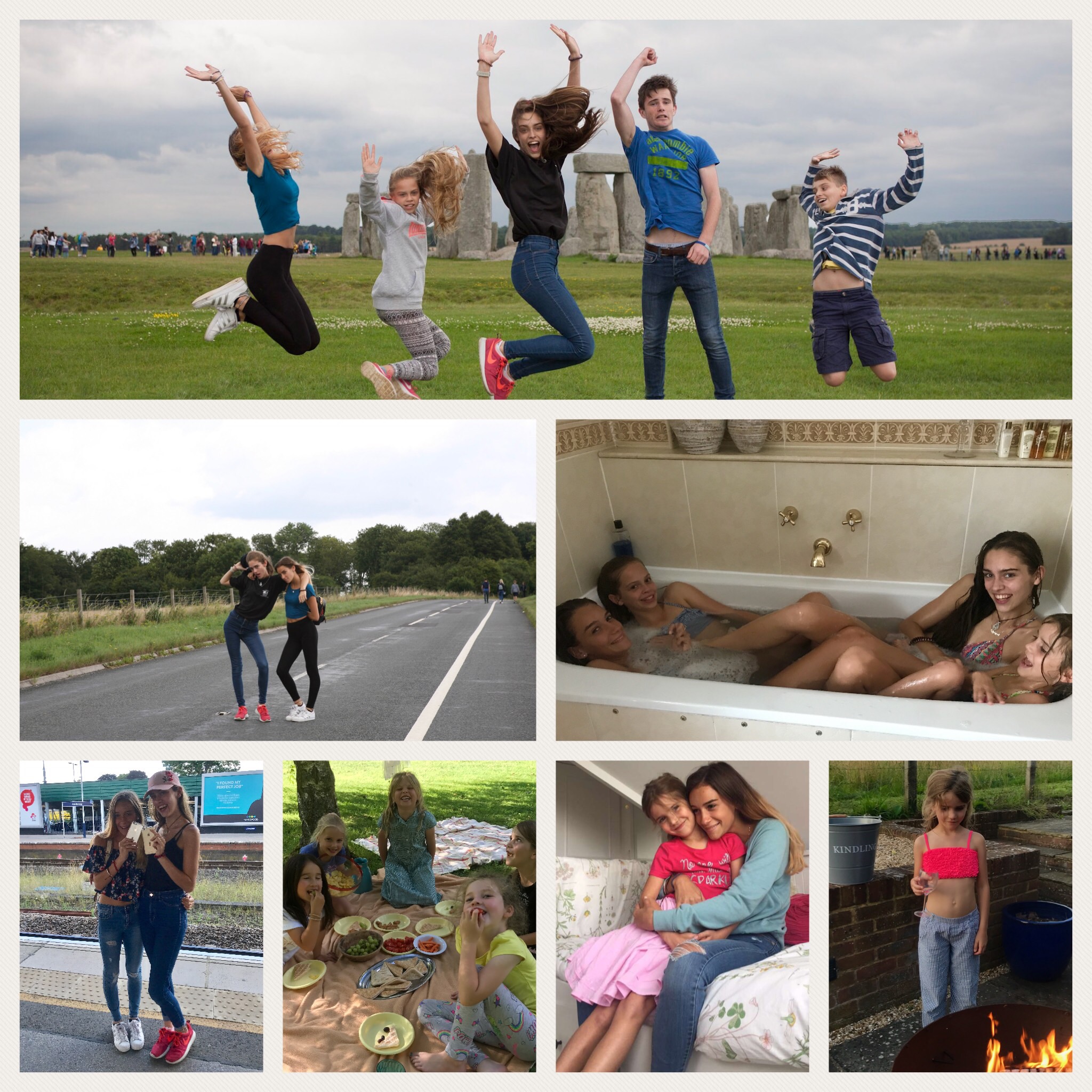