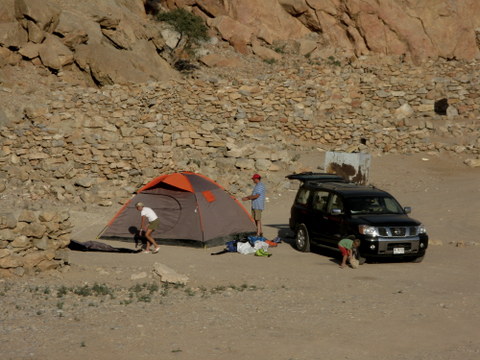 Dibba is probably the best beach within easy driving of Dubai – about two hours.  It is a long sandy beach with a large 30m high sand dune that runs along the edge of the cliffs.  At the  Southern end the beach is quite wide and open.  At the northern end there are the stone remains of several buildings. You have to cross into Oman just half way through the Dibba township.  As of September 2012  the process had changed requiring you to provide evidence of a hotel reservation so that we think there was some record of people crossing into Dubai from Oman.    We turned up in October and luckily managed to get across but were warned that next time we would not be so lucky.

Before September you could quite freely cross over the UAE/Dubai border at either the beach road or on the inland road.  If your plan was to camp on the beach this looked like being a problem.  Contact me for the answer.

The best place to camp is at the far northern end of the beach beside the cliff face.  It is a popular spot so there is plenty evidence of previous campers and day trippers   The beach at the northern end is a little rocky at low tide which may suit those who wish to snorkel.   Over the years we notice that there were quite of variety of places to camp from right on the beach,  close to the cliffs at the far end or right on top of the large sand dune.

The best directions are to head to the Golden Tulip Hotel (see google map ref below) which is about a 15 minutes drive once you pass the Lulu shopping center when coming from Dubai.  We used to stop here for ice and water as we could never work out when the little stores closer to the hotel were open.   When you get to the hotel, just beyond the hotel, the road enters onto the beach via a large open area.  A toilet block on the far side signals where the soft sand and the mandatory “airing down” of the tyres is required.  We didn’t attempt the sand dune climb but many do which can be entertaining. The beach sand is very soft but our 3 tonne Nissan Armada was fine at about 18psi.  The first time  we ventured on to the sand it was a little scary as there is not much advice around on what pressures to use or even what 4 wheel drive settings to use.   Getting stuck with a car full of gear and four kids on a tidal beach was not an appealing thought.  It did happen later when we visited Snoopy island beach.  For the Armada low ratio seemed to work a treat

The toilet block use to have running water but now seems to be disconnected.

The Omani police vist regularly and at night which initially caused us some concern but came to be reassuring after awhile.  The best format we came to was two nights stay with lunch at the Golden Tulip on the full day.  Most people only stay a night as you need day time cover and lots of water.

Dibba harbour with the boat trips to the Oman Fjords round the corner is very close to the Hotel but we did not explore much else in the area.